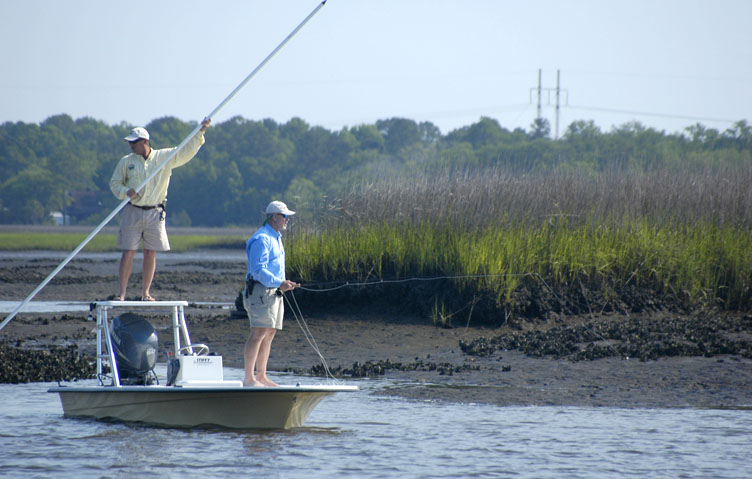 Annually, more than a quarter of a million people enjoy saltwater fishing along the Georgia coast. Each of these individuals has a different motivation and expectation from a fishing trip. Some value fishing as an opportunity to be outdoors with friends and family. There are those looking for a fresh seafood dinner while others are only satisfied when they catch and release a trophy fish. Simply put, there is no “average” saltwater angler.

“We spend thousands of man-hours each year doing surveys of the saltwater fish populations that provide angling opportunities for our citizens and visitors. We use this information as a basis for regulations to keep those fish abundant while, hopefully, at the same time meeting the expectations of our anglers. Periodically, we need to take the pulse of the fishing community to determine if we are striking a good balance between conservation and angler satisfaction,” explained Doug Haymans, director of the Coastal Resources Division (CRD), within the Georgia Department of Natural Resources.

During late 2017, CRD contracted with an independent research company, Responsive Management, to conduct a telephone and online survey of Georgia resident saltwater anglers and guides to determine their participation in various types of fishing, their satisfaction levels, and their attitudes toward CRD management with an emphasis on red drum and spotted seatrout.  Responsive Management used a sample of Georgia residents possessing a CRD Saltwater Information Program permit to represent recreational saltwater anglers. All 134 state-licensed resident saltwater fishing guides were invited to participate in the survey, as well.

The survey resulted in 1,965 completed interviews with recreational saltwater anglers from 124 Georgia counties. The median age for this group was 49 years, and the majority was male. Most had been saltwater fishing in Georgia for 16 years or more.  A total of 83 guides (62%) completed the survey with most having 13 years or more of experience.

The survey contained too many questions with various response options to report here. Instead, a sample of questions and responses follows. The complete report can be downloaded from the link  on the bottom of this page.

In an open-ended question, anglers were asked if anything detracts from their saltwater-fishing satisfaction or causes them to participate less; nearly half (46%) said that nothing does.  Some of the top constraints mentioned are outside of CRD control, including lack of time (12%), distance or travel time (7%), and weather (5%). Otherwise, 12% of anglers cited restrictive regulations and 7% mentioned no or poor access to fishing areas.

Guides were also asked if anything takes away from their clients’ fishing satisfaction. Again, nearly half (48%) said that nothing does. The top negative factors mentioned (at 17% each) were a lack of fish and restrictive regulations.

The survey asked saltwater anglers to rate CRD’s performance in four activities (providing saltwater-fishing opportunities, informing the public about saltwater fishing laws and regulations, managing saltwater fisheries resources, and informing the public about conservation). The results were generally positive: from 67% to 74% gave ratings of excellent or good for the four efforts, far exceeding the percentages giving ratings in the lower half of the scale (fair or poor), which ranged from 17% to 25%.

The top-rated effort was providing saltwater-fishing opportunities (74% rate it excellent or good, while 17% rate it fair or poor); the lowest of the four rated efforts was informing the public about conservation. Guides were given the same four CRD efforts to rate. Results were favorable (and ranked in the same order), though notably less so compared with anglers’ ratings.

Guides were more divided than anglers over current regulations: 52% of guides are satisfied, while 39% are dissatisfied. Two-thirds of dissatisfied guides (66%) feel that regulations are not strict enough, by far the top response.

Currently, the creel limit for red drum in Georgia is five per day per person, with a 14- to 23-inch-slot-length limit and no closed season. Red drum angler satisfaction with these regulations far exceeded dissatisfaction: 72% are satisfied, while 16% are dissatisfied. Conversely, red drum guides are more dissatisfied (53%) than satisfied (44%) with the regulations.

The survey provided a choice of slot-size ranges for red drum and asked respondents to select a preference. Red drum anglers most frequently selected a slot size of 14 to 25 inches (27% chose this), while guides most frequently chose 15 to 23 inches (28%). Over half of red drum anglers (56%) would like the creel limit to remain at five fish per person.  The response with the second highest percentage was six to 10 fish (26%). Red drum guides, compared with red drum anglers, prefer a lower creel limit: Their median is three fish, and a total of 51% of the guides preferred either two or three fish.

The survey informed respondents that, effective January 2016, the minimum size for keeping spotted seatrout in Georgia increased to 14 inches. By a 2-to-1 margin (42% positive to 20% negative), more anglers believe this change had a positive rather than a negative impact on their fishing. Nearly two-thirds of guides (63%) believe the impact was positive, compared with 14% who believe it had a negative impact.

Spotted seatrout anglers were divided on whether they support a hypothetical slot-length limit for the species as currently exists for red drum (i.e., fish can only be kept between a minimum and maximum length measurement): 43% support and 39% oppose. Guides were more supportive than anglers for a slot limit: 61% of guides support this, while 31% oppose.

“It is encouraging to see that many of our customers, the saltwater anglers and guides, are satisfied with our efforts and the quality of fishing opportunities in coastal Georgia. However, there is always room to do better so we’ll be looking for ways to improve, particularly in the areas of public access and communication with the angling community,” Haymans said.