The Georgia Department of Natural Resources Coastal Resources Division utilizes a near shore red drum survey which encompasses state and federal waters off the coast of Georgia.  Current sampling occurs in waters of Doboy Sound to St. Mary's in Georgia.  Initiated in 2006, this pilot survey has examined the effects of bait type and hook size on species selectivity as well as examining spatial and temporal effects on catch rates.  The survey also produces abundance estimates for shark species found offshore. 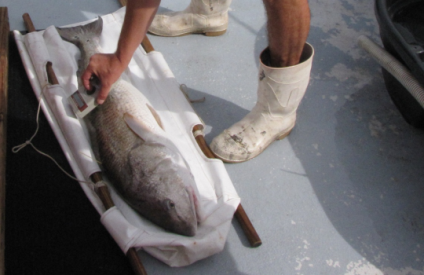 Sampling is conducted monthly from June through December.  Thirty-five stations are sampled each month in waters off southeast Georgia.  Stations are randomly chosen from a subset of sites identified as areas with high encounter probabilities.  Three strata are delineated off Georgia (inshore; near shore; offshore) and sampling efforts are proportionally allocated to match the emigration pattern of adult reds.  All stations are sampled during daylight hours and are generally located in water depths between 13 and 65 feet. 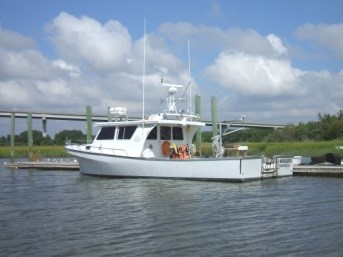 The longline is deployed from the R/V Marguerite, a 47’ offshore vessel. The mainline is made of 600 lb. monofilament and is approx. ½ nautical mile in length. A total of 60 droplines are attached to the mainline, where each dropline consists of a longline snap, 1.5 ft of 200 lb. monofilament, and a 12/0 circle hook on the terminal end. Hooks are not offset and have barbs depressed. The total soak time is 30 minutes with half of the hooks baited with squid and the other half baited with mullet.  Soak times is 30 minutes in duration, measured from second anchor deployment to first anchor retrieval.

All sharks captured are identified to species, sexed, measured, weighed and examined for umbilical scarring/remains and then tagged.  Atlantic sharpnose sharks are not tagged.  Red drum are measured, weighed, fin clipped, and tagged.  All other specimens are identified and counted.  The survey has been successful at capturing red drum and has caught 14 shark species, four of which are commonly caught in Georgia (Atlantic sharpnose shark, blacknose shark, bonnethead, and blacktip shark). 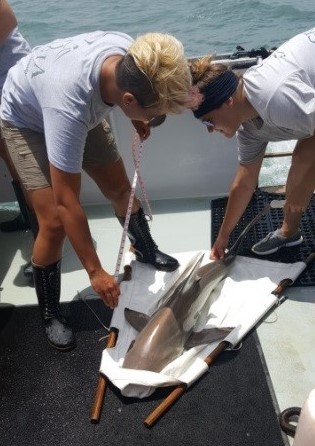