The Georgia Department of Natural Resources announced today that a new men’s record for the heaviest shortfin mako shark, Isurus oxyrinchus, has been awarded to Tyler Gary of Richmond Hill. 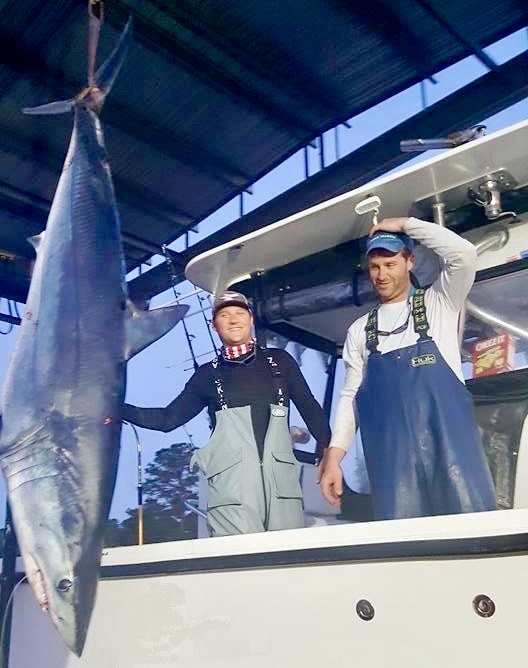 On April 26, 2017, Gary caught a 440-pound shortfin mako while fishing offshore 70 miles NE of Savannah in an area known as The Deli.   After a thirty-minute fight, Gary landed a fish that appeared large enough to set a men’s state record.  He brought the fish to TravelCenters of America in Richmond Hill where the fish was weighed on a certified truck scale, the only scale in the area capable of weighing a fish that big.

"It was a great day of dolphin fishing topped off with a magnificent catch,” said Gary. “It's a memory that won't soon be forgotten.” Gary will receive a certificate from the GA DNR acknowledging his record catch, which will be added the Georgia Saltwater Gamefish Records published at www.CoastalGaDNR.org and in the 2018 Georgia Sport Fishing Regulations. Mr. Gary’s new record eclipsed the previous Georgia record of 228 ½ pounds held by Mr. Harry Wooley since 1975.

Found worldwide in tropical and warm temperate seas, mako sharks are solitary, pelagic, fast swimming species that rarely come in close to shore. Makos have a streamlined, well-proportioned body and a conical pointed snout. The back of the shortfin mako is a brilliant blue gray or cobalt blue and the sides are light blue, changing to snowy white on the belly including the lower jaw. The current International Game Fish Association’s all tackle record for a mako shark is 1,221 pounds.  That fish was captured in Chatham, MA in 2001.

Anglers wishing to enter a fish for a new state record must be sure to have the fish weighed on certified scales in the presence of at least one witness.  Anglers should first check with local seafood markets then grocery stores and feed-and-seed stores.  During business hours, anglers can have their catch weighed at the Coastal Regional Headquarters in Brunswick.

A listing of the rules and current men's and women's records can be found at the following link State Records , along with information on how to submit a fish for consideration.  It is important to provide several photographs of the fish for identification (digital if possible) along with the fish on the scale showing the weight, and with the angler. There are also minimum weights for several species.