The Georgia Department of Natural Resources has announced a new women’s record for African pompano, Alectis ciliaris, landed in Georgia by Jennifer Roberts of Springfield, Georgia. 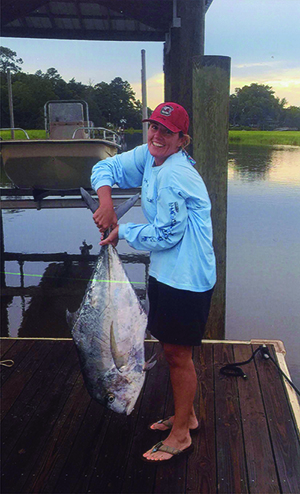 “The African pompano is common in tropical waters throughout the world but is rare as far north as Georgia,” says Spud Woodward, Ga DNR Coastal Resources Director. “Due to its body shape and size, an adult African pompano is a formidable opponent on light tackle, and excellent table fare like other pompano species.”

Constructed in the 1980’s by the U.S. Navy, M2R6 is one of eight structures located offshore Georgia providing fishing opportunities for pelagic gamefish, such as king mackerel, amberjack, and barracuda. Coordinates for the tower are Latitude: 31.533332825; Longitude: 80.233329773.

Roberts received a certificate from the GA DNR acknowledging her record catch, which will be added to the Georgia Saltwater Gamefish Records list published at State Saltwater Records Program page on CoastalGaDNR.org and included in the 2017 Georgia Sport Fishing Regulations.  As there is no current men's record for African Pompano a 20 lb minimum has been set.

Anglers wishing to enter a fish for a new state record must be sure to have the fish weighed on a Georgia Department of Agriculture certified scale in the presence of at least one witness.  Anglers should first check with local seafood markets then grocery stores and feed-and-seed stores.  During business hours, anglers can have their catch weighed at the Coastal Regional Headquarters in Brunswick.

A listing of the rules and current men's and women's records can be found at the State Saltwater Records Program page on CoastalGaDNR.org, along with information on how to submit a fish for consideration.  In addition to an accurate weight, it's important to provide several photographs of the fish along with the application.  There are also minimum weights for several species.  For more information, contact the Coastal Resources Division at (912) 264-7218.