Commissioner Mark Williams has announced that Georgia's food shrimp harvest season will be extended until 6:15 p.m. on Monday, January 15, 2018. Commercial food shrimp trawlers may continue to operate in waters eastward of the sound-beach boundary currently open to power-drawn trawls. Commercial and recreational cast netters, as well as persons using a beach seine, can harvest food shrimp from waters open to the use of these gears. 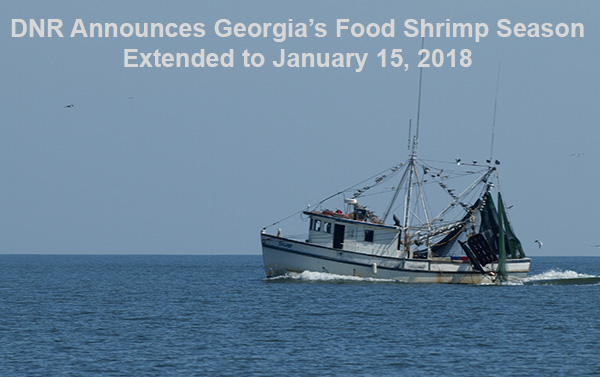 “Our coast wide trawl survey showed shrimp abundance in the coastal waters of Georgia to be only slightly below the long-term average.  Based on our data and input from the Shrimp Advisory Panel, we recommended to Commissioner Mark Williams that the food shrimp harvest season extend till the 15th of January to allow for continued harvest,” explained Lindsey Aubart, Marine Biologist with the Coastal Resources Division.

The department typically extends food shrimp season beyond the usual December 31st closing date unless environmental conditions such as abnormally cold weather or lower-than-normal shrimp abundance makes such an extension unadvisable. Thus far, water temperatures and salinities in Georgia’s estuaries are within normal ranges when compared to long-term averages.  The decision to extend the food shrimp season was made in consultation with members of the Shrimp Advisory Panel and can be altered if emergency circumstances warrant.

To date, 216 trawler licenses and 15 cast net licenses have been issued for the 2017-2018 license year. Trawler licenses sales are 10% below the 10-year average while cast net license sales continue to be well below the 200 license limit.  Data collected via the Georgia trip ticket program indicate that 2017 ex-vessel prices are very similar to prior year’s values. However, prices were exceptionally high in 2015.  The 2017 average price per pound is $4.39 which is 3% lower than the 5-year average of $4.54.

For more information on the extension of food shrimp season, please contact the Coastal Resources Division office at (912) 264-7218.