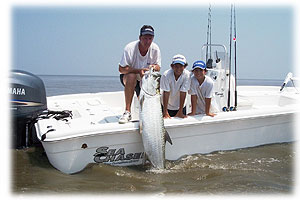 Many fishermen from non-coastal counties, especially those from out-of-state, may possess limited knowledge of saltwater fishing techniques and may be unfamiliar with Georgia’s indigenous marine sport fish species. Recreational saltwater fishing is excellent in Georgia and every year, large numbers of spotted seatrout, red drum, black drum, sheepshead, flounder, whiting, spot and croaker are taken. However, anglers fishing in unfamiliar waters that exhibit six to eight foot tides may find difficulty in learning the proven techniques necessary for producing a good fishing experience.

The following recommendations are intended to provide information on basic fishing techniques for some common sport fish found in Georgia’s coastal waters. Also, daily information on what’s biting can be obtained from most coastal marinas or local fishing equipment and bait outlets. Phone numbers for marinas and fish camps are provided in the county map section.

The water in these longshore currents will eventually flow back out to sea. When the currents reach a break in the offshore sand bar they will rush through the narrow opening, creating a rip current or undertow. If ever caught in a rip current, swim across it; never try to swim against a rip current.

Spotted Seatrout: The most commonly used method for seatrout is drift fishing a standard deep floating terminal rig baited with live shrimp. When fishing with a float rig, most anglers use bait casting reels with rods eight feet or longer. Seatrout are typically mid-water striking feeders. Live bait such as shrimp, finger mullet, mud minnows, and menhaden (pogies) are recommended. Although live shrimp are considered the best year-round bait for seatrout, from mid-November through March when water temperatures cool, artificial lures such as plastic tail grubs work just as well and oftentimes better. Fishing tackle for artificial lures usually consists of light spinning or spin cast reels spooled with 8-10 pound line and rods six feet or longer. A number of inexpensive lures resembling small fish may be purchased at marinas or tackle shops. When fishing with lures, retrieve the line as slowly as possible, allowing the lure to occasionally touch bottom.

Seatrout are basically schooling fish in areas with large quantities of dead oyster shell, or near live oyster beds. They prefer fringe areas adjacent to banks, points, jetties and bars, but are also taken in deeper channels during cold water winter periods, or along open waters of the beaches during spring and summer.

Red Drum (Spottail Bass): The most commonly used method for red drum fishing is a standard deep floating terminal rig baited with live or dead shrimp or small crabs. Although school-size red drum can be caught year-round in inshore estuarine waters, young-of-the-year red drum typically show up in June-August. However, fall is the best time to catch small school-size drum. Fishing for young red drum (<15 lb) employs the same basic tactics, gear, and areas used to catch spotted seatrout. In addition to shrimp and fiddler crabs, many anglers often use live finger-size mullet or mud minnows to target medium-size red drum (5 - 15 lb) found on open mud flats adjacent to large expanses of salt marsh grass. Mud minnows and small mullet may be easily collected with two-funnel minnow traps baited with bread or a piece of fat-back bacon and set in a tidal ditch. If the trap is left unattended for an extended period of time, insure the area will have adequate water depth during low tide.

Angling for large red drum is strictly a surf fishing proposition. Surf fishing requires a long surf rod for long distance casting. Most anglers use 30 pound test monofilament line and terminal rigs consisting of 4 to 8 oz. pyramid or egg sinkers or 3 to 4 oz. storm sinkers rigged as a fish-finder rig with 7/0 to 9/0 standard hooks. However, with recent size regulations requiring the release of the large-size drum, 12/0 to 14/0 circle hooks are highly recommended. Circle hooks are self-setting which generally results in more hook-ups and the circle hook generally hooks in the mouth region thus greatly reducing “gut-caught” drum. The most popular bait is fresh-cut mullet and blue crabs for targeting large (>20 lb) red drum. Fish for large drum in the spring and fall in heavy surf near inlets. 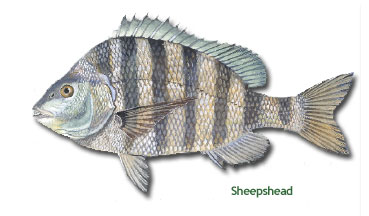 Sheepshead: Usually found around docks, piers, jetties, and other structures encrusted with barnacles and oysters, the sheepshead is notorious for its ability to steal bait from the novice angler. The recommended sheepshead rig consists of an 1/2 oz. egg sinker, 8 to 10 inch leader, and 1/0 or 2/0 hook baited with a fiddler crab. Hook the fiddler by inserting the barb of the hook between the walking legs leaving the barb inside the crab. Fiddler crabs may easily be obtained by hand from marsh sand flats located along island causeways.

After lowering the baited hook to the bottom next to a piling or encrusted structure, immediately take the slack out of the line and very slowly raise and lower the baited hook. The least amount of resistance or rod tip vibration should be considered a bite. After reeling in the line and only the carapace or shell of the fiddler crab remains on the hook, the angler will readily appreciate the skill of this king of bait stealers. The angler should never give up, only patience and time will provide the necessary skills to catch the elusive sheepshead. 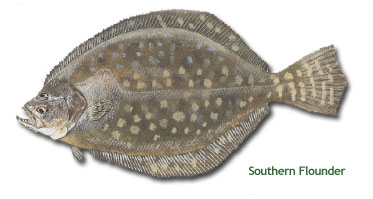 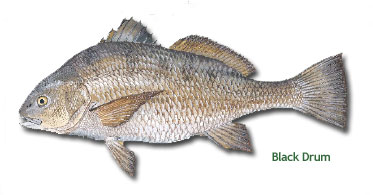 Black Drum, Croaker, and Spot: These bottom feeders are some of the most numerous and easily caught fish and are usually taken with a “fish finder” or “bottom rig” baited with shrimp or fiddler crab. They are primarily estuarine fish, abundant in Georgia’s inshore waters from April to October. Concentrations of black drum are often found near piers, docks, jetties, bridges and areas of naturally occurring oyster shell mounds. Croakers prefer sandy hard bottom while Spot prefer firm mud and clay bottom.