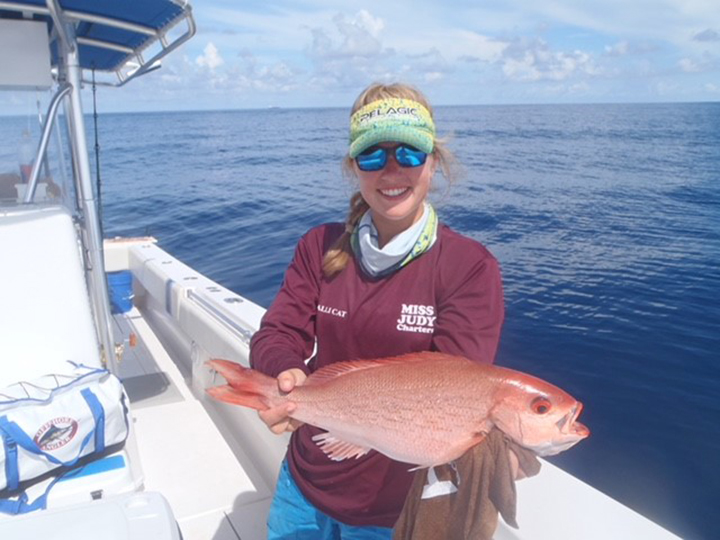 The Georgia Department of Natural Resources announced today that a new women’s saltwater gamefish record for the heaviest vermillion snapper, Rhomboplites aurorubens, has been awarded to Alli DeYoung of Savannah, Ga.

On July 6, 2018, DeYoung caught a 3-pound 10-ounce vermillion snapper while fishing offshore 70 miles E of Savannah in an area known as B-Liner Hole.   While fishing aboard the Screamin’ Barnacle with her father, Captain Dan DeYoung, the 15-year-old angler landed a fish that appeared large enough to establish a women’s state record.  She brought the fish to Russo’s Seafood in Savannah where the fish was weighed on a certified scale.

DeYoung will receive a certificate from the GA DNR acknowledging her record catch, which establishes the first women’s record for the species in the Georgia Saltwater Gamefish Records. Her record catch will be added to the list published at CoastalGaDNR.org/RecreationalFishing and will be included in the 2019 Georgia Sport Fishing Regulations.

Anglers wishing to enter a fish for a new state record must be sure to have the fish weighed on certified scales in the presence of at least one witness.  Anglers should first check with local seafood markets then grocery stores and feed-and-seed stores.  During business hours, anglers can have their catch weighed at the Coastal Regional Headquarters in Brunswick.

A listing of the rules and current men's and women's records can be found at CoastalGaDNR.org/RecreationalFishing, along with information on how to submit a fish for consideration.  It is important to provide several photographs of the fish for identification (digital if possible) along with the fish on the scale showing the weight, and with the angler. There are also minimum weights for several species.

For more information on saltwater records, contact the Coastal Resources Division at (912) 264-7218.