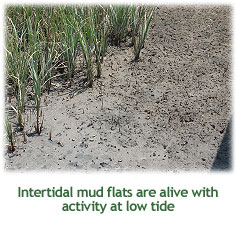 Intertidal mud flats are located along the edges of the salt marsh. This harsh habitat is covered by water at flood (high) tide and exposed to the scorching sun at ebb (low) tide. It consists of a soggy substrate (soil) made up of clay and silt that is deposited during slack tide. Slack tide is the brief period between flood tide and ebb tide during which the water is not flowing in or out but is still. Only the upper layers of this muddy substrate contain oxygen. The deeper layers contain decaying organic matter that gives off a hydrogen sulfide gas that causes a rotten egg smell.

Only a few plants and animals live in the tidal flats, but those that do are an important food source for larger animals. Phytoplankton and algae grow on the surface of the mud (giving it a greenish tint) and attach to hard surfaces such as old shells or logs. Insects breed in small pools and the larvae feed on algae and zooplankton. Buried animals such as cockles, whelks, amphipods, lugworms and fiddler crabs eat microorganisms that are trapped in the mud. When the tide comes in, phytoplankton, algae and zooplankton serve as the food source for filter feeders (oysters, clams, mussels, barnacles), and several types of worms including the parchment tube worm. Shrimp and crabs eat worms, while crabs 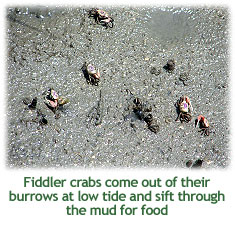 and flounder eat shrimp. Also at high tide, organisms that always live in the water come in to feed. Blue crabs and several species of hermit crabs scavenge for food while fish such as the mummichog, silversides, spot and croker feed on insect larvae, zooplankton and small fish.

When the tide goes out, the muddy substrate is exposed and fiddler crabs come out of their burrows and sift through the mud for food while periwinkle snails eat algae off the surface of the mud. Mud snails scavenge the surface, eating both living and dead organisms. Wading and shore birds like egrets, clapper rails, gulls and sandpipers come in to eat the snails, worms, fiddler crabs or any other floating or crawling animal. Oyster catchers feed off the oysters, mussels and clams. Raccoons also venture onto the mud flat to feed on whatever they can find. The animals that live in or on the mud flats are important food sources for larger animals and any disturbance of this harsh but fragile habitat could have grave consequences for the food chain. 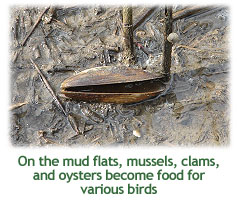 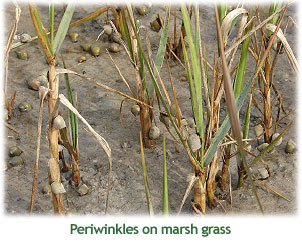