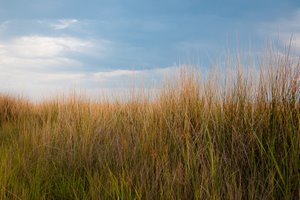 Georgia’s coastal marshlands encompass approximately 368,000 acres in a four to six mile band behind the barrier islands. Thriving in the waters of the estuaries, these marshes have been identified as one of the most extensive and productive marshland systems in the United States. There are nearly 400,000 acres of coastal marshlands in Georgia which represent a considerable portion of all remaining marshlands along the entire eastern coast of the United States.

These tidally inundated grassy wetlands crossed and drained by a series of increasingly smaller tidal creeks were created as a result of melting glaciers during the ice ages. The origin of Georgia’s marshlands can be traced back to the Holocene melting of the continental glaciers. One theory suggests that sediment, sand, and soil brought down by the rivers, blown by the wind, and washed ashore by the waves gradually built up into ridges and dunes on the landward side of the shoreline. Water from the melting glaciers resulted in rising sea levels which flooded the coast and mainland, and the ridges were given prominence as barrier islands. Ocean waters behind these islands formed lagoons, and later the marshlands. This process took place several times; thereby creating additional marshes between more barrier islands, and finally the salt marshes as we know them today.

Developed from the lagoons which filled with sediments and deposits from rivers and streams flowing to the ocean, the marshlands of Georgia gradually began to assume their status as a vital part of one of the world’s greatest estuaries. Symbolic of the salt marshes is a tall cord-like grass called Spartina alteriflora, which virtually covers the coastal marsh area. The environment in which the Spartina grass flourishes is neither all terrestrial nor all marine, but rather a combination of both.

Spartina actually does better in a fresh water environment but is not often found there because of the competition from other species. But in the zone where land meets a salt water bay, very few plants can survive. However, Spartina is very abundant in this area because of an evolved adaption. Most other plants die when inundated by salt water at high tide, but “cordgrass” has the ability to remove most of the salt from the water it uses keeping high concentrations of dissolved solids in the root structure and extracting salt through highly specialized salt glands.

These plants are hardy. They have extensive underground structures, both leaves and stems. The plant roots grow horizontally, giving rise to new plants, allowing for fast colonization of the salt marsh. And because the structure is underground, the plant is protected from hazards such as freezing or fire. Some scientists estimate that the below-ground biomass of Spartina can be as much as 2 ½ times that of the visible, aboveground parts - an important point because these structures hold the marsh together and slow erosion.

Productive almost beyond comprehension, this salt marsh grass is responsible for the continuation and survival of the intricate balance of nature within the estuarine ecology. Producing nearly twenty tons to the acre, it is four times more productive than the most carefully cultivated corn. Georgia’s salt marshes produce more food energy than any estuarine zone on the eastern Seaboard.

Truly the tide is the life blood of the marsh bringing its subsidy with each coming and going. The incoming tide nourishes and feeds the grasses of the marsh and the outgoing tide harvests its products and, through the tidal energy, breaks down the grasses and feeds the resources to the sea. Coastal tides average approximately 6 ½ feet in the marshes but exceed 10 feet during high spring tides.

As the grasses die and decompose, nutrient byproducts are produced and taken by the outgoing tides and begin to feed an ever growing number of organisms until all forms of marine life in the estuary have benefitted. These minute, decaying particles feed small fish, plankton, oysters, shrimp, clams, and crab. The marsh serves as a nursery ground for the growing juveniles of fish and shellfish, and these fish in turn support larger fish and so the cycle goes on and on. In addition, the stems and grass provide refuge for many adult animals in estuaries where salt and fresh water mix.

Some of it is grazed upon directly by oceanic herbivores, but most is attacked by decomposing bacteria and fungi. Nutrients released are then absorbed by microscopic plants called phytoplankton, which utilize them along with sunlight to produce their own organic matter. These, in turn, are fed upon by larger zooplankton, which are microscopic but larger than phytoplankton.

Small fish feed on zooplankton. The small fish are fed upon by the big ones. If something happens to remove Spartina production from the marsh the food chain will break affecting all of its levels. The Spartina marsh serves as a primary nursery ground for many economically important fish and shellfish. Were it not for the marsh, the juvenile populations of our crabs, shrimp, and fish would be greatly reduced. The commercial catches offshore of many popular food fish show a direct relationship to the ratio of marsh versus open water inshore. In other words, in regions where the inshore areas contained numerous salt marshes, the offshore regions yielded more fish and other important food species. Catches of many species of shrimp are greatly increased by the amount of vegetated marsh directly inshore of the fishing area.

One of the most important roles marshes and estuaries play is that of a tertiary treatment facility for mineral nutrients from man’s systems. The marsh grass and sediments act as both a sink and a pump, meaning that large amounts of nutrients come into the estuary from the land and sea. Once in the marshlands, the nutrients are quickly stored and become available to other organisms.

Additionally, our salt marshes act as buffers against offshore storms. Without them, hurricanes and northeasters on the Atlantic coast would do a lot more damage. The destructive fury of large storm-spawned waves and tides is greatly reduced by their passage across the marsh. The grass absorbs most of the energy, which lessens the damage that can be done.

Recognizing the great value of salt marsh, the Anglo-American legal system held the tidal marsh in trust for all people for almost 400 years. The State of Georgia, in adopting the English common law, adopted the principles of this trust. The Georgia General Assembly provided for wiser use of the state’s beaches, dunes and marshes by establishing two laws which conserve the fragile coastal Environment: The Coastal Marshlands Protection Act of 1970 and the Shore Assistance of Act of 1979. These Acts created committees to consider permit applications for any development or alterations proposed for marshes or sand sharing systems (i.e. beaches, sand dunes, or nearshore sand bars). Georgia was among the first states in the nation to take such steps to protect the marshes from development and other encroachments.