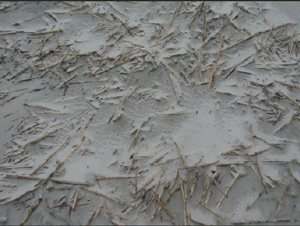 Scientists define sand as unconsolidated (loose) grains of minerals and rock that are less than 2.1 mm (1/2 inch) but more than .06 mm (1/400 inch) in diameter. Aeronologists, scientists who study sand, can "read" the history of sand and tell it's source, the climate of the area where it originated, the distance and environments it traveled through, and what the environment was like where it was found.

There are four common sources of sand: weathering on continental granitic rock, weathering of oceanic volcanic rock, skeletal remains of organisms, and precipitation from water. Sand is either biogenic, if it originated from an organic (once living) source, or abiogenic, if it is inorganic (was never living).

Sand that originated from granitic or volcanic rock or precipitation is abiogenic whereas sand made from skeletal remains of organisms is biogenic. Continental sands that come from granite are rich in quartz, feldspars, and micas. The darker grains in continental sands are various heavy minerals, the composition of which is generally characteristic to the area they come from. The whiter a continental sand is the more quartz it contains. Quartz is the most stable of the common minerals on the earth’s crust, thus, the farther a continental sand travels, the richer in quartz it becomes. The other less resistant minerals have broken down and dissolved in the water. The grains become more rounded and well sorted, making them more mature, the farther they travel. Volcanic oceanic sands are rich in basalt and have very little or no quartz. Most volcanic oceanic sands come from volcanic islands.

Precipitate sand grains form by the precipitation of mineral material (predominately calcium carbonate) dissolved in water. Skeletal sands are made of the remains of animals and plants and generally have not traveled very far from their source. The size of skeletal sands depends on the skeleton they came from and the amount of exposure to wind and waves. Most skeletal sands come from tropical regions. 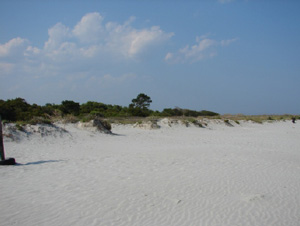 The types of minerals a sand contains determines its color. The texture or size of the sand grains is important. The smaller the particle of sand, the easier it is for the waves to pick it up and carry it along. The texture of the sand determines the type of beach that will be formed by the waves. Coarse sands result in a steep beach while fine sands form smooth, hard packed, gently sloping beaches.

The sand on Georgia’s beaches originated from rocks in the Appalachian Mountains. Through thousands or millions of years of chemical and physical weathering and subsequent erosion, the sand first traveled to streams, then to avers and eventually to the ocean. Once in the ocean, it was picked up by waves and currents and eventually deposited on the beach. On their way Georgia’s coast, the sand particles underwent abrasion by being rubbed against other sand and rock particles. The farther a grain travels, the rounder it becomes.