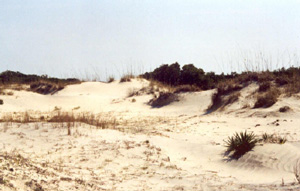 Sand dunes form between the shrub zone and the beach. Older stabilized dunes called secondary dunes usually exist between the shrub zone and the newer, usually higher, less stable primary dunes. A sand dune forms wherever sand blown by the wind can be trapped by plants and debris. Wind velocities of 12 miles per hour or greater are capable of moving fine, dried beach sand. The formation of dunes is dependent upon the direction of the prevailing winds and fair-weather winds move more sand, subsequently producing more dunes than do storm winds. Storm winds, because they are accompanied by strong waves and rain, generally erode dunes.

Because they are made of sand, dunes are not static but are in a constant state of migration landward and along the coastline. Dune grasses such as panic grass and sea oats are vital to the building and stability of the dunes. These plants have the ability to resist salt spray and burial by the sand. When wind strikes the blades of these grasses, its velocity is slowed and sand is dropped and piled up. The sea oats and panic grass have the ability to grow upward through the sand enabling the dunes to build higher. They also have extensive root systems that can extend downward as far as 30 feet, thus helping to stabilize the dunes. These root systems have propagation rhizoids that extend horizontally, making the sea oats less dependent on seeds for new growth. Eventually, plants such as sea rocket, saltwort, dusty miller, pennywort, beach elder, saw palmettos, prickly pear, yuccas, beach croton and morning glory invade the dunes. All of these dune plants have special adaptations such as thick, waxy, fleshy or furry leaves and many grow close to the sand to conserve moisture and to avoid salt spray and wind. 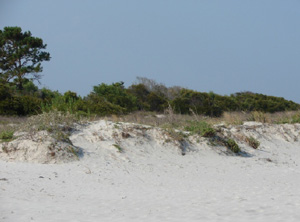 Animals that inhabit the dunes must also have adaptations for living in the desert-like conditions. During the day when temperatures can reach 120° F animals like the ghost crab dig into the sand. Sand dune insects like tiger beetles and wasps have a dense fur covering their bodies to insulate them against the heat. Other animals like the dune grasshopper, wolf spider, ghost crab and young sanderlings have color adaptations so they blend in with the sand to escape their predators. Most dune animals including rabbits and mice visit the dune in search of food during the late afternoon or at night when the temperatures are cooler. Many birds like terns nest in the dunes and let the natural heat incubate their eggs. Many times the only evidence of animals in the dunes are the tracks they leave behind.

Sand dunes are vital to the survival of the island. They are the first line of defense against the effects of the wind and waves and protect the interior of the island from these erosional forces. Often dunes are eroded away during storms, but they soon rebuild. Building too near the sand dunes can endanger the dunes and thus can endanger the whole barrier Island they protect. Disturbing, damaging or destroying dunes to build private homes and commercial buildings such as hotels, restaurants and shops is impractical and dangerous. Without the protection of dunes the beach will erode quickly and destructively. It is actually in the best interest of builders to keep well behind the dunes so that the dunes can protect their precious structures from certain battering by the sea, wand and salt they would surer without such protection.

It is important to remember that dunes are fragile and very susceptible to the presence of man. Walking on the dunes can break the delicate plants and create areas where water can overwash behind the dunes and increase their erosion. The picking of sea oats is not only detrimental to the dunes but it is also against the law, requiring heavy fines of $500 or more.