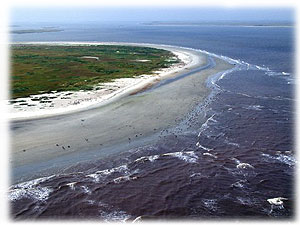 The sound is the deeper portion of the estuary located between the mud flats and marshes of the mainland and barrier island. The temperature and salinity of the sound varies with the amount of fresh water entering from rivers or rainfall and from mixing with salt water during incoming tides. An increase in rainfall will quickly decrease the salinity and most times the temperature of the water. The substrate or soil type at the bottom of the sound is a direct result of the deposition of mud and sand from the freshwater streams of the drainage basin that empties into the sound. The grain and particle size of this bottom substrate determine the type, distribution and abundance of the organisms that live there.

Common plants found in the sound are marsh grasses, phytoplankton, algae and sea lettuce (Ulva, an attached green algae). A wide variety of zooplankton, which are microscopic animals, live in the upper layers of the sound. Most animals of the sound have made special adaptations to catch their food. Grazing snails crawl along rocks and pilings eating the algae collected there. Carnivorous snails like the oyster drill and moon snail have a special adaptation, called a radula which is a sandpaper-like tongue used to drill holes in the shells of oysters, clams and other mollusks. Blue crabs use their strong claws to crack shells and catch worms and fish. The starfish uses its tubed feet to open the halves of clams. Sand dollars and sea cucumbers hunt around in the sand for detritus while filter-feeders like worms, clams, scallops, barnacles and sea squirts filter their food out of the water. Sea anemones, soft corals and some fish gab their food from the water as it flows past their tentacles. Fish eat other fish, crustaceans, mollusks, worms and anything else they can catch. Shrimp, hermit crabs and blue crabs are the scavengers of the sound. They hunt along the bottom eating detritus and other dead material they find.