Anything that causes water to move can cause a wave: earthquakes, underwater landslides, changes in atmospheric pressure, underwater volcanic eruptions, the movement of ships, or even a fish jumping. The 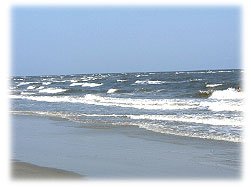 When waves near shore, they change because the water molecules can no longer complete their downward orbital motion. As the depth of the water decreases, the bottom of the wave begins to feel drag and the energy movement in the wave slows down, shortening its wavelength. This flattens the circular wave motion into an oval shape. The back of the wave is now traveling faster than the front and overtakes it, forcing the wave into a peak. The wave breaks or spills over when the depth is less than one-half its wavelength.

When a wave breaks it does move the water. The water rushing onto a beach is called a wash or swash and the water returning to the ocean is called a backwash or undertow. As the water rushes onto the shore it picks up loose particles of sand and carries them backward as it rushes back out to sea. Some waves transport sediment to the beaches. The wash brings sand up onto the beach but the gentle backwash is not able to carry as much sediment back to the ocean. These waves result in deposition or building of the beaches.

All waves have the same measurable characteristics. The highest part of a wave is the crest. The lowest part is the trough. The vertical distance between the wave crest and trough is the wave height. The distance from a certain point on one crest or 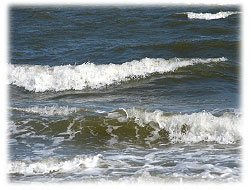 trough to the same point on the next crest or trough is the wavelength. The amplitude of a wave is the distance the wave moves the water above or below sea level and is equal to one-half the wavelength. The wave period is the time it takes for succeeding crests to pass a specified point.

Georgia’s coast has only moderate wave energy, the lowest along the southeast Atlantic coast. Because of Georgia’s gently sloping and wide continental shelf, the water deepens gradually and much of the wave energy is dissipated before it reaches Georgia’s beaches. The average height of a breaking wave on Georgia’s coast is nine to twelve inches.