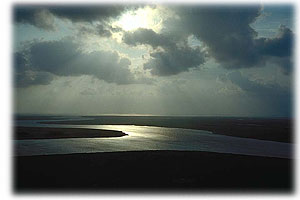 Currents are rivers of water in the ocean. The two major types of currents are surface currents and density currents.

Surface currents are driven by the wind. Friction between the wind and the water sets these currents in motion. The winds that drive surface currents are the Westerlies that blow west to east at 40 degrees to 50 degrees latitude and the trade winds that blow east to west at 20 degrees latitude. Surface currents occur in near shore waters with a maximum depth of 100 to 200 meters. They are shaped by the Coriolis effect, the pull of gravity and the position of the continents. As the earth rotates, both air and water currents are deflected to the right (clockwise) in the Northern hemisphere and to the left (counterclockwise) in the Southern hemisphere. If a surface current originated in warm latitudes, its waters are warm and it is called a warm current. Those that originate near cold latitudes become cold currents. The air above a current is either warmed or cooled by the water and therefore currents have an important effect on the climates of the land areas near them.

A special type of surface current is a longshore current. Longshore currents occur along a coastline. They are caused in the following way: waves strike the shore at an angle and the water accompanying the waves tries to rush back out to sea. Along the shoreline of barrier islands is a series of offshore sand bars that stops the movement of the water back to the ocean and causes it to flow parallel to the shore between the shore and the offshore bar. These longshore currents are responsible for transporting sand from the north to the south end of our barrier islands and froth island to island.

The water in these longshore currents will eventually flow back out to sea. When the currents reach a break in the offshore sand bar they will rush through the narrow opening, creating a rip current or undertow. If ever caught in a rip current, swim across it; never try to swim against a rip current.

Density currents flow in deep water. They are denser than the water around them and gravity causes them to sink. The density of the water is affected by both the temperature and the amount of dissolved substances in the water. Cold water, which is more dense than warm water, will sink. Salt water is more dense than fresh and will sink below fresh water. Rivers entering the ocean carry large amounts of sediment with there. River water is less dense and comes out on top of the denser salt water. As the velocity slows, the sediments are dropped to the bottom.

Each current has its own characteristic salinity, density and temperature. The major currents affecting Georgia’s barrier islands are longshore currents and the Gulf Stream, a warm current, that flows northward a short distance off the continental shelf. Currents are rivers of water.