Salt marshes are coastal wetlands that are flooded and drained by salt water brought in by the tides. They are marshy because the soil may be composed of deep mud and peat. Peat is made of decomposing plant matter that is often several feet thick. Peat is waterlogged, root-filled, and very spongy. Because salt marshes are frequently submerged by the tides and contain a lot of decomposing plant material, oxygen levels in the peat can be extremely low—a condition called hypoxia. Hypoxia is caused by the growth of bacteria which produce the sulfurous rotten-egg smell that is often associated with marshes and mud flats.

Salt marshes occur worldwide, particularly in middle to high latitudes. Thriving along protected shorelines, they are a common habitat in estuaries. In the U.S., salt marshes can be found on every coast. Approximately half of the nation's salt marshes are located along the Gulf Coast.

These intertidal habitats are essential for healthy fisheries, coastlines, and communities—and they are an integral part of our economy and culture. They also provide essential food, refuge, or nursery habitat for more than 75 percent of fisheries species, including shrimp, blue crab, and many finfish. 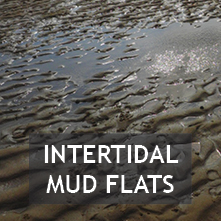 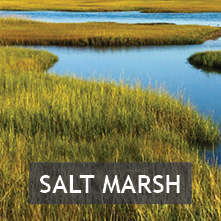